Added to Your Check-Ins.

Marvel fans will soon get a first look at the upcoming Disney Plus show "WandaVision," according to Paul Bettany, aka Vision.

You can add Little Women to the list! Take a look at even more movies and TV shows that were so nice they made 'em twice (at least).

Films viewed
a list of 39 titles
created 9 months ago

Want to share IMDb's rating on your own site? Use the HTML below.

You must be a registered user to use the IMDb rating plugin. 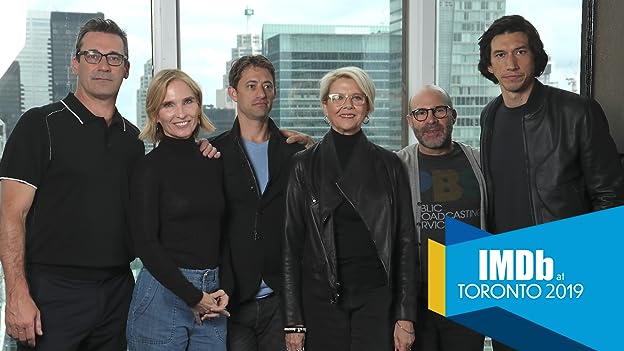 Director Scott Z. Burns, Adam Driver, Annette Bening, Jon Hamm, and Daniel Jones discuss how the story of The Report was translated to the screen.

The true story of a British whistleblower who leaked information to the press about an illegal NSA spy operation designed to push the UN Security Council into sanctioning the 2003 invasion of Iraq.

Balloon pilot Amelia Wren and scientist James Glaisher find themselves in an epic fight for survival while attempting to make discoveries in a gas balloon in the 1860s.

A corporate defense attorney takes on an environmental lawsuit against a chemical company that exposes a lengthy history of pollution.

Behind Vatican walls, the conservative Pope Benedict and the liberal future Pope Francis must find common ground to forge a new path for the Catholic Church.

A Chinese family discovers their grandmother has only a short while left to live and decide to keep her in the dark, scheduling a wedding to gather before she dies.

On the eve of their high school graduation, two academic superstars and best friends realize they should have worked less and played more. Determined not to fall short of their peers, the girls try to cram four years of fun into one night.

In 1950s New York, a lonely private detective afflicted with Tourette's Syndrome ventures to solve the murder of his mentor and only friend.

Based on the true story of a real-life friendship between Fred Rogers and journalist Tom Junod.

After becoming a mother, a filmmaker uncovers the untold history of China's one-child policy and the generations of parents and children forever shaped by this social experiment.

A quiet observation of the triumphs and defeats of daily life, along with the poetry evident in its smallest details.

THE REPORT is a thriller based on actual events. Idealistic staffer Daniel J. Jones (Adam Driver) is tasked by his boss Senator Dianne Feinstein (Annette Bening) to lead an investigation of the CIA's Detention and Interrogation Program created in the aftermath of 9/11. Jones' relentless pursuit of the truth leads to findings that uncover the lengths to which the nation's top intelligence agency went to destroy evidence, subvert the law, and hide a shocking secret from the American public. THE REPORT is written and directed by Scott Z. Burns, and the film also stars Jon Hamm, Sarah Goldberg, Michael C. Hall, Douglas Hodge, Fajer Kaisi, Ted Levine, Jennifer Morrison, Tim Blake Nelson, Linda Powell, Matthew Rhys, T. Ryder Smith, Corey Stoll, and Maura Tierney.

Rated R for some scenes of inhumane treatment and torture, and language | See all certifications »

The CIA interrogation methods were reverse-engineered from the military's Survival, Evasion, Resistance, and Escape (SERE) program, which exposes U.S. service members to torture and abuse that they might face if captured by enemy forces. These SERE tactics were designed to emulate the kinds of torture historically used by enemy forces to produce false confessions and propaganda. See more »

Q: What is the recommended age range of the movie?
See more »

'The Report' couldn't get made at a better time. With everything happening in today's American and global political climate, it shows how little the general public actually is allowed to know about whatever happens within the borders of their government buildings. An entire country is at stake when secrets come out, that shouldn't have been secrets in the first place when laws get executed correctly.

Idealistic Senate staffer Daniel J. Jones (Adam Driver), gets tasked by his boss, Senator of California Diane Feinstein (Annette Bening), to lead an investigation into the CIA's post 9/11 Detention and Interrogation Program. Jones' relentless pursuit of the truth leads to findings that uncover the lengths to which the nation's top intelligence agency went to destroy evidence, subvert the law, and hide a shocking secret from the American public.

Scott Z. Burns hasn't directed a feature length film since 2006's 'Pu-239'. Having previously written films such as, 'The Laundromat', 'Side Effects' and 'Contagion', it seems he has a very good work relationship with this films' producer Steven Soderbergh (director of last named films). With 'The Report' he knows what he's going for and doesn't hold back on any occasion. The story goes off like a missile, and only slows down when hitting its target at the finish line. That might be a challenge for some viewers, but the suspense throughout the second and third act is rare and delivers what political polymaths are looking for. To those who aren't particularly interested in politics and cover-ups, this might be a tough one to sit through.

Adam Driver, is truly on a roll these last couple of years. With two more films on the horizon in the last two months of 2019 ('Marriage Story' and 'Star Wars: The Rise of Skywalker'), it seems there's no stopping him in becoming one of the most talented actors of this generation. He shows just how focused and career driven he is as his character Daniel J. Jones. He's unsurpassed and will definitely get recognition for his hard work coming awards season.

What plays like a political 'Social Network', could've benefited from a rewrite by Aaron Sorkin, just to streamline it a bit more. The dialogues are heavy and littered with dark humour, but without any real character development, it misses the opportunity to make the audience connect with anyone on a deeper level. You never get to look behind the suits into their homes. The mental struggles of being accused of whistleblowing and torturing people, must take its toll on politicians and CIA-agents, no? We get little hints at their personal lives when being interrogated by government officials, but this is all just small talk. It does go without saying, Greg O'Bryant deserves much praise for editing this film. I wonder how long the rough cut must've been.

There's a wide range of well known actors passing by as fundamental characters in the big scheme of things. Annette Bening, brilliant actor taking on the full look and characteristics of Senator Feinstein, doesn't have many explosive scenes to wow, but is subtly captivating. Corey Stoll, Jon Hamm, Maura Tierney and Michael C. Hall all have important parts to keep things moving, but with the little amount of screen time fail to impress with anything more than acceptable.

Burns' 'The Report' is an important watch, delivering facts in a striking manner. It's worth watching for Driver's performance alone, observing a man who loves doing his job and excels at it. A history lesson in American politics and terrorism with a little dig at propaganda filmmaking and journalism, and a big spotlight on the CIA's misconduct.

Contribute to This Page